Uncertainty is one of the most over-used words of recent times, featuring in large letters in any word cloud created on media commentary. Indeed, some go so far as to say that in 2016, history began another chapter.

So is the world really becoming more uncertain or does it just feel that way?  What are the major trends underpinning this insecurity and can we use this knowledge to start visualising what our world might look like in the mid-century? 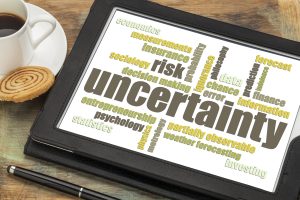 Technological developments continue apace, into aspects of our lives not predicted just a few years ago.  This will have significant implications for the type of companies and jobs in the future and in how business operates.

The internet and the Cloud is reducing costs and removing barriers to entry around the world, whilst enabling the reality of virtual teams sited across separate geographies but operating as cohesive units.

Social media brings international transparency to business with impacts on new markets, brand perception, quality of offering and on the recruitment and retention of people.

Leaders will have to narrate a clear vision for their people to follow.

The rise of wearable technology, including inventions to monitor neural responses, creates tremendous opportunities for consumer markets and scientific advancement.

Artificial intelligence and the rise of robots will see jobs redefined or eradicated on an unparalleled scale – researchers believe that almost half of today’s jobs will be automated by 20341 – many tasks performed by ‘experts’ following a defined set of rules are susceptible to automation, even expert radiology.

The volume and speed of data now available brings both benefits and huge challenges, to manage this and recruit people with the skills to interpret and use this effectively.

A leader’s decisive navigation of information becomes paramount; when and what to use.

Alongside these developments, is the minefield of technological risk.  With a rising chance of cyber-attack, (78% of UK companies have been attacked over a twelve month period2), businesses are still underprepared for the financial and reputational damage. Growing sophistication in attack methods, requires continual updating of plans against this. 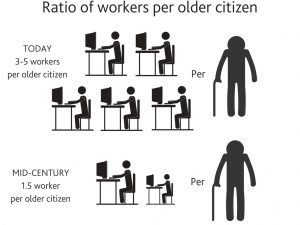 An ageing population will bring new market opportunities and unprecedented demands on a smaller working population, along with a greater generation mix in the workplace.  By 2040, it is estimated there will be more older citizens than children3.

The march of people to cities is escalating quickly with projections of 41 mega-cities with 10 million inhabitants or more by 20304.  This risks straining infrastructure, services, the environment and employment opportunities to levels greater than many national states can provide, leaving governments struggling to meet basic housing, transportation and sanitation needs and risking social stability.  What this means in the future for governments to coordinate economic and political resources for sustainable urbanization, remains to be seen. 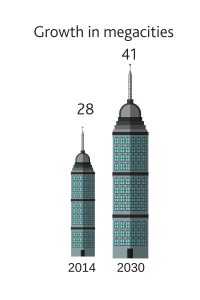 Economic power is shifting away from the West, towards the East with countries like China and India accelerating their share of global cash flow.

Leaders will have to navigate greater complexity in different political, legal, regulatory and cultural environments, and spot the opportunities in quite different emerging consumer markets

Global economic growth is sluggish with unexpected political outcomes at the forefront of this – Trump’s election, a possible spat with China and even Marine Le Pen’s poll ratings – are creating insecurity in markets. The UK’s exit from the European Union and the US President’s withdrawal threats from trading deals gives further uncertainty. Companies with complex multi-national supply chains face ever-more complicated tariffs.

Volatile economic conditions are not helped by fluctuating oil production seeing growth in international trade at its lowest since 2007.  Places like the Eurozone are relying predominantly on Germany to continue to drive growth.  The looming Italian banking crisis, together with Greece’s debt load, could become potentially explosive jeopardising the European Union’s stability.

The 2008 financial crash, lagging wage increases and increased wealth inequalities has transformed into a growing distrust of politicians.  Rising support for anti-establishment parties has upset the political equilibrium of many Western societies – Trump’s election, UKIP’s strengthening in British politics and the growing prominence of populist parties in Europe raises questions on what protectionist policies may mean for labour mobility, trade barriers and legislation.

The recent debate on climate change is changing as the reality of a growing frequency in extreme weather events and natural disasters hits home in exacerbated risks of water crises, food shortages, flooding and constrained economic growth.  This is playing out in front of us as Australia burns under the hottest temperatures and longest fire season in its history.

Global co-operation on diminishing the risks from climate change also looks less secure in light of President Trump’s scepticism of deals such as the Paris Agreement.  Without America’s full participation, the agreement’s goals are probably unattainable.

A growing global population (projected to reach 8.5 billion in 2030)5 and rapid expansion of middle-class consumers (2.2 billion by 2030)5 is straining resource supplies of energy, minerals, water and food, made more difficult by their existence in harsh geographic locations and in countries with political risk.

Disruption is the new normal

It becomes apparent that we are surrounded by change.  So no wonder that Robert Kegan says many leaders are “in over our heads”.  Where do we even begin to steer a course through all this turbulence?  Where there are risks, however, there are also tremendous opportunities.  We have a critical role to help humanities’ ingenuity prevail to find ways to make the most of these opportunities.

Given these challenges, our contention is that knowledge, skills and experience are simply not enough.  The old paradigm of what to look for in a successful leader needs significantly updating.  We have spent the past year developing and renewing our approach to leadership assessment and development to take account of this new world, a world where we need to measure and develop not only the knowledge, skills and traits of old but crucially a leader’s ability to make sense of a rapidly changing world, the structure of their thinking and meaning-making.  Our article Leadership assessment for uncertain times discusses how we have going about doing this.