Developmental psychologists have been writing for the past 40 years about how people continue to grow and develop throughout adulthood.  In the past decade, this research has been moving from academic literature and into the workplace with tools being created to measure the ‘stage’ of someone’s ‘meaning-making’ capacity.

Over 70 organisational development, leadership development and talent specialists, together with a smattering of business leaders and coaches, convened on the 24thMay to learn about and debate all things vertical at an event hosted by MDV Consulting and run in collaboration with a group of development professionals.  Here is a summary of the discussion.

Mike Vessey opened by suggesting that trends in modern organisational life have catapulted an interest in developmental approaches as people struggle to make sense of the pace, complexity and volatility of change.

And what is it?

Karen Ellis described the concept of vertical development; the idea that human development goes through a number of distinct stages of meaning-making through which we are coming to terms and building an understanding of the world around us.  The 3 strands or capacities described by the 3D vertical development framework cover Cognitive, Personal and Interpersonal components.  Although intricately linked, they follow their own patterns of development that can be broken into a number of corresponding stages of meaning-making or ‘action logics’ as described by Constructivist Adult Development Theory.

“Capacity is the potential for developing intellectual, personal and interpersonal capabilities which enable one person to take on much more complexity than another.”

Liz Veecock and Jo Hennessy described that whilst developmental growth and the transitions between stages do occur naturally, the progress can be supported by a variety of existing tools, used appropriately.  Understanding the different stages of adult development can guide us towards different development resources.  The appropriateness of a tool is determined by the level of complexity and the degree of ambiguity it introduces.

Taking one of the strands, table groups were invited to consider tools and approaches which might help develop cognitive complexity.  Here are some examples of the tools that can be used to support transitions:

Question one considered where this approach might be relevant or less relevant and how to make the case for a vertical lens on development.  In what ways might vertical development be useful in your organisation?  How do you position this framework to an ‘Expert’ / ‘Achiever’ audience? How could this improve the ROI of your current development processes?

Responding to a VUCA world

A vertical development approach allows an organisation to disrupt thinking and set new patterns of operating, doing so in a structured way.  The impact of this approach is much wider than traditional approaches to leadership development.  As leaders develop through the stages and change the way that they relate, communicate and lead, the culture of their organisation will naturally shift in line with this change.

“This approach has the ability to really change the business and lead to a culture shift.”

The concept of vertical development was seen to be well researched based on many years of sound theory.  The presentation of a ‘3D’ model was also viewed positively, as it was seen to support this rigour and provide a holistic view on measuring an individual’s transitions.

Delegates emphasised that motivation will be improved by giving leaders hope that they can make a difference, as the approach provides an opportunity to align an individual’s aspirations with their development, which also feeds through into better wellbeing.  By valuing those who have a Strategist action logic, retention of creative individuals and ‘late stage’ leaders is likely to be improved as the approach influences the entire organisational system and give options and hope.

A vertical development approach was seen to allow a clear pathway for leaders to develop and explore, giving structure and focus to transitions.  The tailoring of programmes for the specific ‘centre of gravity’ of the individual set against the context of the business strategy was identified as supporting better transitions.  Furthermore, the approach facilitates personal growth, as well as advances in seniority and results in more rounded leaders.

The language can be problematic

When introducing the concept of vertical development, use of language that is relevant to the context and the organisation will be crucial. Getting familiar with the action logic labels and meanings can take time, and run counter to the growth potential of the model if people are labelled and ‘boxed-in’.

“In smaller organisations, in the newer industries which are constantly in that volatile, uncertain environment, the argument’s even easier. They’ve got to have the majority of their people to be able to manage in different situations, be able to cope with rapidly moving complexity, be able to work their way through ambiguity to find a new way forward.  For the people running those organisations, it becomes not just about the leadership cadre, it becomes about pretty much everybody you employ.  If you can then identify and develop those capacities in people, really from quite a young age, that gives you an enormous advantage and it allows you to respond to whatever opportunities are coming up.”

This is not ‘the answer’ to all development issues or scenarios.  Horizontal development – building skills and breadth – is just as important as increasing vertical capacity and people who develop too quickly vertically are likely to be quite brittle if they have not also built out breadth.  Vertical approaches are going to be most relevant or helpful where people face complexity in their work.

The ‘vertical’ metaphor can be unhelpful if viewed in a pejoratively hierarchical manner.  ‘Capacity building’ might be an alternative. Before the industry settles on a new name, and ‘vertical’ catches hold, it would be good to align on definitions that capture the complexity of what is actually growing and developing.  More capacity is helpful when the demands placed upon the post holder call for it, but it is not a ‘good thing’ in and of itself.

It is unfortunate that the nature of the metaphor can lead us to think that ‘higher is better’.  What the metaphor is trying to describe is an increasing capacity of the individual to cope with more and more complexity.  If you talk to anyone who has worked in the field for a while, there is no value judgement of one stage being ‘better’ than another.  In fact, we prefer to use the language of stages being ‘later’ and ‘earlier’ rather than higher and lower because that’s much clearer about the fact that one stage builds on the foundations of the previous stage.

We default to the staged descriptors of the LDF action logics only since these relate to the most widely used labels in the UK and North America and closely align with the original work of Jane Loevinger. 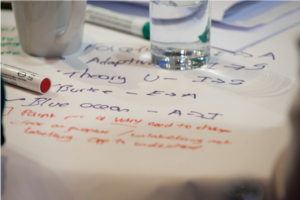 Communication of purpose and centre of gravity reference

For any framework or model to be successful, it is necessary to communicate the purpose or explain why change is required.  It was felt the same was necessary if organisations were introducing a vertical development approach – clear communication which applied the theory to practical examples and workable solutions would help a workforce understand why development through different stages would help achieve organisational and personal objectives.  There was a view that this would result in good organisational leadership practices.  By focusing on applicable language, such as ‘most people are this… some people are like that’, it provides a useful ‘centre of gravity’ reference which people could relate to more easily.  The three capacities were seen as helpful in providing a more nuanced and subtle ‘centre of gravity’ for learning design as well as allowing individuals to pinpoint personal development steps.

It was acknowledged that for organisations to succeed, they require a mix of people at all stages in their development and that this recognition should feed through into the value systems of the organisation.  This mix of people with different ‘centres of gravity’ also had implications for how an organisation aspires to achieve a diverse workforce.

“Be aware of labels which can stick to people.  We need to ensure respect for all.”

Delegates agreed that although no one could be pushed to transition or to a stage of development, the approach was a useful catalyst for identifying and creating opportunities for readiness amongst their leadership cohorts.  The distinctions between the capacities as well as the nuances within the different development stages, provides an avenue to truly understand when someone is willing and ready to make a shift – this in turn should enable more effective development.

Use of language needs consideration

Delegates highlighted the use of language across the organisation as an important consideration when using a vertical development approach.  Although there were seen to be benefits in creating a common language around descriptions of the different stages, there were also concerns that ‘labelling’ people could create issues of division and may have the potential to create stigmas about the stage an individual is at.  As one delegate explained “it might translate into how bright are you?”

“Terms such as ‘vertical’ and ‘individualist’ may be misinterpreted or evoke negative connotations.”

The issue of confidentiality about the development stage an individual was at was seen as important.  The level of confidentiality around this assessment data, leaving it to the individual as to whether or not to share this information and clear alignment to the development journey rather than for other assessment purposes, were all approaches seen to allay fears around ‘labelling’ an individual.

A common suggestion, which was identified as a way of minimising any risk of stigmatisation, was to approach the use of vertical development as a framework of modular building blocks for a person’s development rather than introducing it as a hierarchical model.  If the theory, i.e. that a person continues to develop and grow, could be used as an underlying principle for organisational as well as individual development purposes, then there is less focus on the language and greater emphasis on the actual developmental journey.

Building capacities was also seen as a principle which could be applied earlier in the organisation’s role hierarchy than just at leadership level but came with the caveat that horizontal development was still essential in order to build a range of skills needed to perform the roles at earlier entry job levels.

Use for development and not assessment

Although assessment of an individual’s stage of development may be part of the developmental journey, the concept of ‘capacity building’ or vertical development was felt to be appropriate by delegates as an approach for developmental purposes – less so for assessment for selection or restructuring purposes.

Any intervention concerning people needs to be handled with care; this is no exception.  In any developmental journey people will only move if they want to, no one is forcing them to do so.

The theory holds out great growth potential for individuals and organisations.  If it is used to judge or box people in or limit their potential, then the system or practitioners are at fault – and we would argue we have a professional and ethical duty to ens